"Tarley Hillis, a Junior Guard of the centuries old Arben Bridge, has yearned and trained for the job her entire life. It is one of the most coveted and dangerous roles in her city of Miraylia yet no one in the world knows what the bridge and its guardians have been protecting for all this time.

For the past six months guards have seemingly been disappearing into thin air and neither the government or even the bridge's Head Commander know why or where their people are being taken.

Tarley takes it upon herself to solve the mystery and in doing so finds out so much more about the bridge, her city and its secret history than she could have ever imagined."

The Arben Bridge is my debut novel which is available as a paperback or an e-book for the Kindle app via Amazon. I had the idea for this book in a dream (I know how wanky that sounds) years ago but for some reason I didn't want to develop the idea. It wasn't until 2014 when I was finishing up a different book that I realised this nugget of an idea just wouldn't go away and so it was time to start to jotting down a few plot lines and characters.

I'm so glad I finally did because I'm really happy with the finished product and, relucant to admit this because I'm British and female; proud of it. I just wish I'd got my arse into gear sooner!

You can order the book here (and if you like it I'd be so grateful if you could give it a quick rating and review on the Amazon page! If you don't like it maybe just lie and support a little indie author anyway?)

Praise for The Arben Bridge:

"Firstly, I wanted to say a massive thank you to the lovely Ellie for gifting me copy of her book - The Arben Bridge. This is the first self-published book I’ve read and I was so impressed with the quality of the physical book itself and how well the book has been written and edited. Ellie, you should be really proud of yourself!
The Arben Bridge is set in the fantasy city of Miraylia and is told primarily from the perspective of Tarley Hillis, a guard of the bridge. The bridge has existed for centuries, but very few in the city - even those guarding it - know why it was built or why it needs guarding. Recently, there have been several un-explained disappearance of guards of the bridge, which the head of the city is seemingly at a loss to explain. It’s rumoured that a rebel group who oppose the bridge (The Inquiry) may be the ones behind the disappearances, but no one is sure how or why they are causing guards to disappear. When one of Tarley’s own family becomes the latest to disappear, she decides to take matters into her own hands and find out what’s going on.
I’ve not read many fantasy novels before (pretty much just Harry Potter and a handful of GoT books), and had always thought that it wasn’t a genre I was particularly interested in… so I was pleasantly surprised by how quickly the storyline gripped me and by how much I enjoyed this book.
The book is action packed and full of unexpected twists and turns that really caught me by surprise and made me even more keen to carry on reading and find out what happens next.
I enjoyed the way that Rees has combined the old and the new - hover cars and communication by hologram, mixed with old fashioned magic and sword fighting. It felt very different from other fantasy worlds I’ve encountered (in books and films), which are often absent of future technology, focusing on more medieval references.
I also loved the characterisation of Tarley - a strong and fiery lead character, with really interesting development throughout the novel.
I’d really recommend this if you’re a fan of fantasy or looking to explore the genre and, of course, if you are keen to support independent authors." @bookmarkedbyhannah on Instagram

"This is one of those books that I couldn’t put down. I read it in two days! The world which the author creates is so immersive, you feel like you have always known Miralyia, it’s streets and the people within it.
The pace of the novel just builds and builds to such a great boiling point, and the characters are really well developed: I adored Tarley - the main character, and was rooting for her throughout.
It’s difficult to write an engaging fantasy novel but this book does such a great job of finding the balance between relatable relationships and an imaginative lifestyle.
100% would recommend. As we are currently in lockdown, there’s no better time to give this new author and debut novel a go! Can’t wait for the next book from this author." Amazon Customer

"First off, I want to say a massive thank you to Ellie for gifting me a copy of her debut novel.
I haven't really read much fantasy books since my childhood, but I am always keen to try books out of my comfort zone and I am so glad that I did with this gem. The story follows Tarley, who see it as her life's misson to protect the centuries old Arben Bridge, set in the mythical land of Miraylia. However over the past 6 months, guards have been disappearing seemingly into thin air and Tarley takes it upon herself to find those missing guards and the mystery that surrounds the bridge. Get ready for a story filled with magic, action and friendship.
I adored this book, I was really invested in the characters and was surprised at how good the twists the and turns were in the novel. I particularly loved the ode to Welsh heritage within the lalfss and chatacers names.
I'm wondering Ellie.... Will there be a sequel?"  @thecwtchbookclub on Instagram

"The Arben Bridge is a brilliant fantasy story set in a beautifully described world that felt both familiar and totally unique. I found myself totally hooked into the story and it's a testament to the writing that I felt attached not only to the heroine Tarley, but also immediately to characters that hardly featured til later in the book. The plot constantly kept me guessing and had all the twists and turns you could want, leaving me wanting to read more adventures from Miraylia If you are thinking about buying this book I highly recommend it, you wont regret it!" Amazon Customer

I am very lucky to have an extremely talented friend in the form of Becky Sandy who created my wonderful book cover. Becky specialises in pet portraits but as you can see her talents extend well beyond that! Take a look at her artwork here: https://beckysandyart.com/ 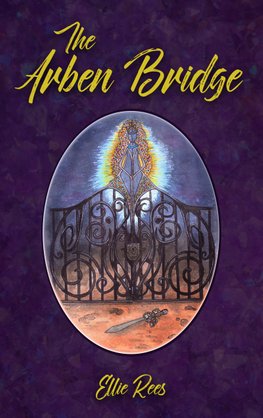